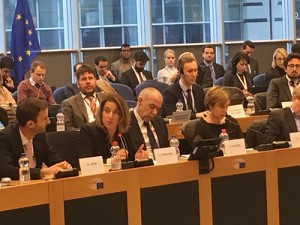 CPMR Secretary General, Eleni Marianou, was invited to an extraordinary meeting of the Regional Development (REGI) Committee of the European Parliament on 01 February, to discuss the reform of Cohesion after 2020.

The meeting was aimed at developing a state-of-play regarding the upcoming Cohesion legislative package, due for late Spring 2018.

A first panel of representatives from the EU institutions (DG REGIO, Council Presidency, Committee of the Regions, European Economic and Social Committee, European Parliament) informed participants on the progress of the negotiations.

MEP Marc Joulaud, REGI Rapporteur on the 7th Cohesion Report, also attended the meeting and presented the European Parliament’s contribution regarding the future of Cohesion Policy.

The second part of the debate focused on the perspectives of territorial associations, represented by Secretaries General from Eurocities, CEMR, AER and CPMR.

Eleni Marianou presented the CPMR member regions’ main concerns regarding Cohesion Policy reform, in particular the likely budgetary cuts for Cohesion envelope after 2020 and the strengthening of the link between the European Semester and Cohesion Policy, which may divert the policy from its initial Treaty objectives.

She made it clear that “even a 10% reduction of Cohesion policy budget would be devastating for its future”, referring to recent CPMR analysis on the impact of these cuts for EU Member States.

For the CPMR, Cohesion Policy should remain the main European investment policy for all EU regions, by maintaining its post-2020 envelope at least at the level of the 2014-2020 budget. Eleni Marianou also called for clarification as to how Cohesion Policy would be further linked to Country Specific Recommendations in the framework of the European Semester process.

The CPMR will continue to be actively involved in discussions regarding the future of Cohesion Policy, voicing the interests of its 160 Member Regions. See the recent CRMR reaction to damaging proposals from the Commission Communication on the new Multi-Financial Framework.