CPMR MFF messages in the spotlight of the Cohesion Core Group

The CPMR’s Cohesion Core Group group held a meeting with EU Member States’ MFF attachés last month to present the CPMR messages on the MFF specific provisions. Those key messages are of core strategic interest as the MFF negotiations will reach a crucial moment in the following weeks with the introduction of figures.

Enriching exchanges between CPMR members and Permanent Representatives happened throughout the session to put main issues and concerns forward, with Attachés from France, Germany, Italy, Portugal, Croatia, Cyprus, Ireland, Malta and over 60 representatives from CPMR Regions participating to the event. 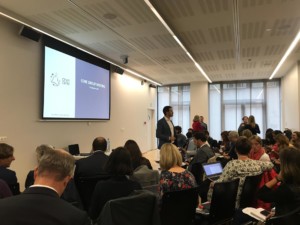 The following topics were put forward:

Overall budget, transfer of funds to direct or indirect programmes and macroeconomic conditionality
Even though figures have not been presented yet, the CPMR showed its concerns in relation to the likely reduction for the Cohesion policy budget line. The CPMR highlighted its position against any further outsourcing of Cohesion Policy funds and the establishment of macroeconomic conditionality.

Allocation method for the European Territorial Cooperation (ETC) goal
One the one hand the CPMR has welcome the fact that ETC allocation methodology finally reflects the reintegration of maritime cross-border programmes under the cross-border cooperation strand. On the other hand, the CPMR does not agree with the proposal of allocation criteria which established as ‘border regions’, only the regions having ½ of their population living within 25 km of a maritime border. The CPMR indeed rather defends a non-discriminant methodology regarding maritime programmes, without any km limit.

Interregional Innovation Investments component – Component 5
The CPMR supports that budget negotiations should not put this innovation component at risk and believes it should be adequately resourced.

Transport policy
The overall level of financing dedicated to the Connecting Europe Facility and its dedicated part to transport infrastructure is a key element for the CPMR in the negotiating box. The CPMR also questions the ability of the budget’s share dedicated to Transport, as it stands to meet the significant investment challenge that the transition to a climate-neutral Europe demands.

Climate Policy
The CPMR welcomed the provision to establish a target of 25% of EU expenditure contributing to climate objectives.