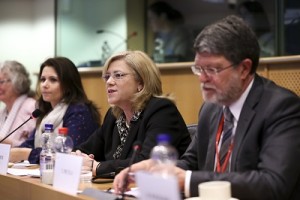 The Islands Commission of the Conference of Peripheral Maritime Regions is calling on the European Commission to develop a strong post-2020 Cohesion policy with increased recognition of the regional disparities affecting islands.

At a meeting of the European Parliament’s SEARICA Intergroup today, Islands Commission member regions and MEPS gathered ahead of the Commission’s proposals for the next EU budget, to urge the Commission to strengthen the future Cohesion policy to tackle economic, social and territorial disparities in all regions, with greater attention focused on the specific conditions of islands.

CPMR Secretary General, Eleni Marianou, said: “Regional GDP forecasts carried out by the CPMR have confirmed that regional disparities in Europe are on the rise, with the GDP of many island regions on the decline, compared to the EU GDP average.”

Gilles Simeoni, President of the Executive Council of Corsica and the CPMR Islands Commission, said: “A consistent 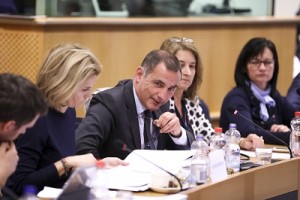 andparticular attention to insularity, as enshrined in Article 174 of the Lisbon Treaty, is currently missing from Cohesion Policy. The post-2020 Cohesion Policy must deliver legislative and financial conditions that will unlock the potential of island regions, for the benefit of the EU as a whole”.

The CPMR Islands Commission has identified key areas where Cohesion Policy support to island regions could be improved:

1) Future regulation on Common Provisions on partnership and multi-level governance should not only reference territorial cohesion and Article 174, but specify how Cohesion Policy addresses the needs and challenges of specific territories. The Commission should play a greater role in evaluating the involvement of regions and the way Member States address specific territories.

2) All island territories should benefit from the same degree of flexibility to the thematic concentration requirements under the ERDF. The idea of a new ‘territorial’ thematic objective is welcome, but investment priorities under the objective should be strictly related to island conditions and investment needs as identified by regional authorities.

3) Regarding European territorial cooperation, maritime cross border cooperation programmes should not be abandoned. They are essential for island regions to reduce their isolation and ensure their full integration into the EU. Specific technical assistance schemes to boost cooperation between islands could be also introduced.

4) Additional Cohesion policy funding could be provided for Member States with islands, or redistribution mechanisms in favour of islands could be set up at national level, with ERDF and ESF funding earmarked for island territories.

results, but these instruments should be significantly simplified and the sharing of best practices improved to boost their use among island regions.