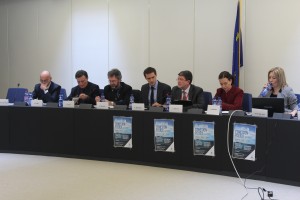 Island regional representatives and Members of the European Parliament met on 10 March in Strasbourg to examine practical ways to improve the islands dimension of Cohesion Policy in the post-2020 period. Organised by the SEARICA Intergroup and chaired by Tonino Picula MEP, Vice-Chair of the Integroup, the seminar involved 13 Members of the European Parliament and Steven Heddle, President of the Islands Commission of the CPMR, and Eleftheria Ftaklaki, Regional Councillor from South Aegean.

Tonino Picula MEP, who chaired the discussion, highlighted in his introduction the need to reinforce the territorial dimension of cohesion policy, including with regards to island territories that are classed below the NUTS II level.

Steven Heddle, Convener of the Orkney Islands Council, and President of the Islands Commission, highlighted some of the beneficial effects of Cohesion Policy for the Scottish islands, such as the integrated development of port infrastructure and marine renewable energy centre in Orkney. Steven Heddle also raised concerns about the current threats to Cohesion Policy. “It is worrying that the reinforcement of what should be a core principle of economic, social and territorial cohesion in the post-2020 period, let alone the specific challenges of islands, does not seem to be currently part of the equation”, said Mr Heddle.

Eleftheria Ftaklaki, Regional Councillor from South Aegean, raised concerns about the recognition of island challenges below the NUTS II level. “In 2014-2020, the region was classified as More Developed Region because of the high GDP of its five most touristic islands, a complete distorted picture for the remaining 45 islands”, stated Ms Ftaklaki. Cohesion policy is needed now more than ever, she added, as the regional GDP in South Aegean fell by a dramatic -35% from 2010 to 2014.

During the debate, MEPs described different aspects of insularity, as well as the development and competitiveness problems from the perspective of their respective islands.

Sofia Ribeiro MEP stated in her concluding remarks that all islands and outermost regions should continue working closely together, by recognising each other’s special characteristics.

Note to the editors

The Seas, Rivers, Islands and Coastal Areas Intergroup (SEARICA) is one of the 28 Intergroups that were approved on 11 December 2014 by the Conference of Presidents. Intergroups can be formed by MEPs from any political group and any parliamentary committee with a view to holding informal exchanges of views on particular issues and to promoting contact between MEPs and civil society.

The Seas, Rivers, Islands and Coastal Areas Intergroup brings together more than 80 MEPs from six different political groups and from 19 Member States. Mrs. Sofia Ribeiro and Mr Tonino Picula are both Vice-Chairs of the Intergroup, responsible, respectively, for Outermost Regions and Islands.

The CPMR Islands Commission is one of the 6 Geographical Commissions of the Conference Peripheral Maritime Regions. It advocates towards the European Institutions and Member States for special attention to be paid to the islands, for the acknowledgement of the permanent handicaps resulting from their insularity, and for the implementation of policies that are best suited to their condition.