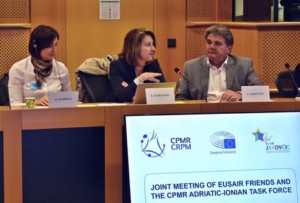 The AI-NURECC Initiative was presented at a joint meeting of the EUSAIR Friends and the CPMR Adriatic-Ionian Task Force at the European Parliament in Brussels, on 17 May. The meeting was organised by the CPMR and Croatian MEP Ivan Jakovcic.

CPMR Secretary General, Eleni Marianou, presented the objectives and activities of the AI-NURECC Initiative, focusing on its aim to support the implementation of the European Union Strategy for the Adriatic and Ionian Sea Region (EUSAIR).

Ms Marianou also stressed the importance for the initiative to continue to engage and collaborate with MEPs, particularly regional MEPs involved in the EUSAIR Friends group.

Speaking at the meeting, Ms Marianou, said: “The AI-NURECC initiative will contribute to the EUSAIR political goals & support its Action Plan, promoting cooperation, growth and prosperity in the Adriatic and Ionian Sea region”.

The EUSAIR Friends is an informal European Parliament group led by Mr. Jakovcic and composed of 17 MEPs from different political groups and Member States with the purpose to follow the progress of the EU Strategy for the Adriatic and Ionian Region.

At the meeting, which Mr. Jakovcic moderated, MEPs, representatives of the CPMR’s member regions and other AI stakeholders shared their opinions on the state of play of EUSAIR and its future.

Mr Jakovcic stressed the importance of unity and cooperation to achieve EUSAIR goals and to build prosperity in the macro-region. He underlined the need of having financial resources from European Commission to support the implementation of the strategy.

The event was also attended by: Emanuela Bora, Assessore Regione Marche, and chair of the CPMR’s Adriatic Ionian Task force, Aldrin Dalipi, Chairman of the Council of the Tirana Region, Greta Bardeli, of the Regional Council of Shkodër, and Joanna Mouliou, Policy Officer at DG Regional and Urban Policy.