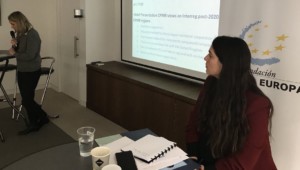 The event brought together over 45 representatives from CPMR Regions to explain their main issues and concerns about Interreg post-2020.

On a very positive note, the CPMR regions welcomed the preliminary support of Member States for the maintenance of maritime cross border cooperation within Interreg cross-border cooperation in its current form.

Partially linked to the point above, a key issue debated was the allocation method for European Territorial Cooperation (ETC). The method proposed by the European Commission could potentially exclude 133 out of 302 maritime NUTS3 regions from future maritime cross-border programmes.

The Cohesion policy attachés of Member States confirmed that the allocation method for ETC and the overall budget for Interreg will be one of the last items to be negotiated.

A critical point of debate was the new Interregional Innovation Investment component, also known as Component 5. Both the CPMR member regions and the Member States’ Cohesion policy attachés underlined the need to better define the management, scope and delivery mode of this new component as well as its future placement in the regulations.

Regarding the future cooperation link with the United Kingdom, the representative from Cornwall Council emphasised

the importance of continued cooperation in the future despite Brexit and the added value of keeping Component 5 open to UK regions. The possible relocation of the proposed component 5 to the European Regional Development Fund and Cohesion Fund regulation raises question marks about the viable participation of Non-EU countries.

Lastly, Nanette Maupertuis, member of the Executive Council of the Corsica Region, which holds the presidency of the CPMR Islands Commission, and CoR rapporteur for ETC, presented the CPMR’s views on islands and territorial cooperation.

Ms Maupertuis stressed the value of island regions as innovative labs and called for the creation of sub-programmes for islands regions as well as a co-financing rate of 85% for this type of territories due to their specific challenges.

The Romanian Presidency confirmed its intention to reach a Partial General Agreement on the Cohesion Policy package by June 2019. That would not include, however, those more political and budgetary elements, which are being negotiated within the Multiannual Financial Framework working group at the Council of the EU.

Take a look at The future of INTERREG: 10 messages from the CPMR