CPMR brings opportunities and solutions to the Commission 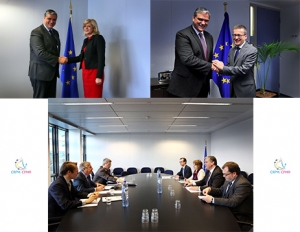 The purpose of these meetings was to offer CPMR effective collaboration with the new EU Commission on issues of relevance to both CPMR and the EU. The CPMR can act as a bridge between the European Commission and regions.

“An active collaboration on financial instruments between the CPMR and the European Commission is needed. The Juncker plan might not reach out to regions which do not have an extensive experience with these instruments and lack the relevant structures to tap into the European Strategic Investment Fund,” stated President Cordeiro at his meeting with Commissioner Crețu. The CPMR offered its expertise for building a close partnership with the Commission on the simplification of Cohesion Policy and to ensure that regions remain its main actors. The territorial dimension of island regions in Cohesion Policy was also discussed.

During his second meeting with Commissioner Karmenu Vella, Vasco Cordeiro underlined the CPMR’s wish to help mobilise investments made by the regions through the European Strategic Investment Fund in favour of the maritime sector, and to strengthen the maritime dimension of the Juncker plan. President Cordeiro also called for “a unified European maritime industrial strategy that could bring together EU initiatives concerning climate change and energy transition, wind and ocean marine energies, as well as the differentiation and diversification of shipyards”. For the CPMR, this strategy could contribute to the Energy Union initiative. Education being a key cross-cutting challenge, President Cordeiro stressed the need to continue and expand the Vasco de Gama – Maritime Erasmus programme.

Vasco Cordeiro also met Carlos Moedas, European Commissioner for Research, Science and Innovation. Again, the links between the maritime and marine research dimension of the Juncker plan and structural funds were underlined by the CPMR President. “The CPMR could be the right conduit to facilitate discussions with regional authorities in the implementation of the Juncker Plan in the areas of interest of the CPMR,” he concluded.

A CPMR statement addressed to the European Institutions was distributed during these meetings.