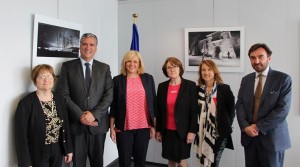 Pictured (L-R) are Laurence Eberhard Harribey, Regional Councillor of Aquitaine Limousin Poitou-Charentes in charge of European Affairs, Vasco Cordeiro, President of the Regional Government of Azores and of the CPMR, Corina Creţu, Commissioner for Regional Policy, Annika Annerby Jansson, Vice-President of the Skåne Region, Eleni Marianou, Secretary-general of the CPMR, and Georges Alexakis, Regional Councillor of Crete in charge of European and International Affairs.

At a meeting on 24 May 2016, with Regional Policy Commissioner, Corina Creţu, representatives from the CPMR political bureau stressed the importance of Europe’s regions in shaping an EU Cohesion Policy that reduces disparities, increases competitiveness, partnership and innovation, and helps to deal with the refugee crisis.

President of the CPMR and the Autonomous Government of the Azores PT, Vasco Cordeiro, said: “This proved to be a very positive meeting which gave us the opportunity to join forces with the Commission in support of an EU Cohesion Policy that boosts growth and prosperity across the EU.”

In particular, the CPMR representatives stressed the need to improve support for Europe’s islands, and made a series of constructive proposals to boost the islands dimension for the post-2020 period.

Regarding migration, the representatives said that a proper EU response to the refugee crisis can only work if regions are directly involved in planning and implementing the policy and specific measures. They also advised that a flexible approach might allow the Commission to address migratory flows in the future.

CPMR recalled the crucial role played by regions in the stimulation of investment in Europe, suggesting that the objectives of the European Fund for Strategic Investment should be reconciled with those of the Cohesion Policy.

Commissioner Creţu thanked the CPMR, addressing them as a natural ally in support of the Cohesion Policy. The Commissioner said that she is looking forward to continuing this fruitful cooperation with the CPMR in the near future.