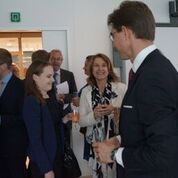 Vice President of the European Commission, Jyrki Katainen, attended the 20th anniversary celebrations of the Helsinki EU Office in Brussels on 14 June 2016.

Eleni Marianou, Secretary General of the CPMR, who was a guest speaker at the event, congratulated the Helsinki office on the anniversary milestone. During her speech she also stressed the importance of territorial cohesion to CPMR and its member regions.

The Secretary General said that creating investments in the framework of cohesion policy has been a very natural way for regions to deliver the EU objectives of growth and jobs at territorial level.

She also expressed the hope that the contribution of the European Fund for Strategic Investments (EFSI) will not distort territorial cohesion and will be spread across the EU territories in a more balanced way than is currently the case.

Ms Marianou said: “The risk involved in investments is quite high in some countries and regions in comparison to others, where the private sector has easier access.  EFSI’s added value could be to promote risky but useful projects that would not otherwise have been funded by the private sector. Adding value to the support currently provided by other policy programmes is a key element of the future shape of the EFSI.”

The Secretary General added that EFSI should be investing in the areas that Europe wants to excel, or where Europe needs to be autonomous, for instance in its energy supply. She said that there is major untapped potential in the maritime sector that EFSI could usefully contribute to.