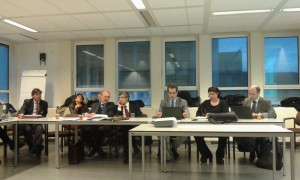 The Cantabrian Minister called on the European Commission to better take into consideration the issue of accessibility in the current documents as well as in the next calls for proposals and to involve Regional authorities to take part in the Forum’s discussions.

Insisting on the fact that the concentration of funding on the Corridor hinders a balanced economic development in the Atlantic territories, even if this concentration corresponds to the institutions’ decision to give priority to the “backbone”, Francisco Martín also urged to better take into consideration links from Peripheral Regions to the corridors. He underlined the fact that territorial cohesion is an objective of the European Union, meaning that all EU instruments should seek to fulfil this objective.

In addition, Francisco Martín welcomed the priority on Motorways of the Sea, perceived by the Atlantic Arc Regions as a crucial element to ensure better accessibility within and between EU sea-basins. Nevertheless, he mentioned that according to the Regions, eligibility conditions for this funding do not entirely meet their needs. He suggested slightly changing the definition as well as eligibility conditions for Motorways of the Sea funding.

By way of conclusion, the Cantabrian Minister asked Brian Simpson to work in closer cooperation with all the Atlantic Regions, not only the ones located on the corridor. He also assured him of the Regions’ full cooperation to update the implementation plan for motorways of the Sea. Finally, he suggested that the final analysis of the survey should be presented to the Motorways of the Sea Coordinator during a meeting to be organised with the CPMR by the beginning of 2016.