European Coordinator for Motorways of the Sea visits Romania 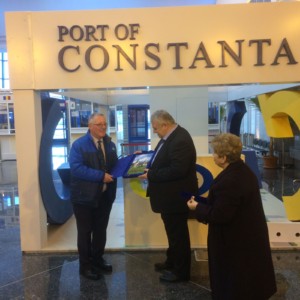 Photo courtesy of the Motorways of the Sea Digital Multichannel Platform

Brian Simpson, European Coordinator for the Motorways of the Sea (MoS), visited Constanta, Romania on  9 December 2016.

During his visit, Mr Simpson met with representatives from the Romanian Ministry of Transport to discuss the future of the MoS policy.  He was also informed about the ports dimension of the Romanian Transport Master Plan.

The CPMR has been strongly involved in the MoS concept since its introduction and Mr Simpson frequently speaker of the CPMR’s Intercommission Working Group on Transport.

The CPMR’s Balkan & Black Sea Commission (BBSC) invites its members regions to continue to work with the CPMR and each other on Transport issues, taking advantage of opportunities offered at EU level. This will help them to benefit from being Europe’s gateway to Central Asia and Middle East.

This article is based on information featured in the website of the Motorways of the Sea Digital Multichannel Platform.