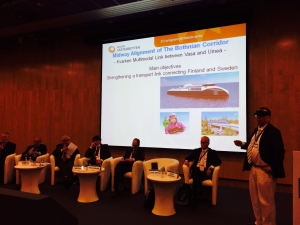 Erik Bergkvist, President of the Regional Executive Committee of Västerbotten (SE) represented the CPMR at TEN-T Days 2015 held in Riga on 22-23 June.

The event was promoted by the European Commissioner for Transport, Violeta Bulc, in cooperation with Anrijs Matīss, Latvian Minister for Transport representing the EU Presidency.

Ministers, Members of the European Parliament and key stakeholders gathered to Riga to discuss the development of the trans-European transport network focusing on the Core Network Corridors and particularly on their implementation and financing.

Speaking during the Forerunners of a sustainable mobility system Round Table, Erik Bergkvist pointed out that the areas located far from the TEN-T core network and the nine CEF corridors should benefit from the action of a specific European coordinator. Therefore, he called on the European Commission to appoint an additional coordinator whose action will be useful in the short term to ensure a balanced implementation of the TEN-T and in the medium turn to help prepare the TEN-T review.

“I wish to recall that the Ten-T shall demonstrate European added value by contributing to cohesion through accessibility and connectivity of all regions of the Union,” he stated.

In all six Geographical Commissions of CPMR there are clear examples of transport projects that need to be considered in the TEN-T core corridor system. Erik Bergkvist, in his capacity as President of a Swedish Region, presented one of them: the Midway Alignment of the Bothnian Corridor, which connects Norway via Umea in Sweden across the Bothnian Gulf of Finland and beyond.

The CPMR reflection on transport corridors will continue at a Seminar on motorways of the sea that should take place at the end of September in the Balearic Islands (ES) in the presence of the European Coordinator, Brian Simpson.